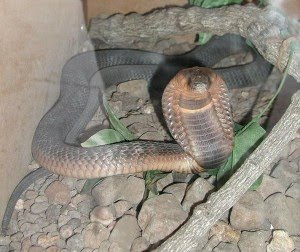 Another charming thing about New York City is how much fun New Yorkers can have over the strangest things. The week-long absence of an adolescent (20 inches, 3 ounces) Egyptian Cobra from its cage in the Bronx Zoo occasioned more merriment than terror. A twitter account was set up in the snake’s name, and it reported back from the Art Museum (10 a.m.), the Empire State Building (3 p.m.), Ray’s Pizza (5 p.m.) and Wall Street (8 p.m.). It was tweeted by the Mayor, and Ellen Degeneres welcomed it to NYC, but told it to stay away from Times Square “which” she said, “is a zoo!” Finally it was found in a dark corner of the reptile house, not 100 feet from its cage. Our heroine is now going from back-room obscurity to Special Attraction, and a naming contest is going on. I’m going to submit “Slyther Lynn” and “Cleo” (one of her famous ancestors killed Cleopatra).
Often-seen subway rats are another cause for dark humor, and of course, rampant speculation. The subway news has it that there is going to be a massive population explosion this summer, which might be true, as 75% of the city exterminators were laid off. I took Jan’s picture in front of a giant (20 foot?) rat on Wall Street — not what you are thinking — someone told me that unions put it in front of non-union businesses. Well, I guess that could apply to Wall Street, too.
Bedbugs are also back in the news; landlords are going to be required to spray ALL the apartments near an infested unit: up, down, right, and left. People are being careful about where they buy their clothes and “fleamarkets” are less popular right now. But New Yorkers seem to take a perverse pride in their wildlife, except for pigeons. It’s the non-wild life I worry about. How can those BIG dogs live in such tiny apartments?
I was really mystified about what picture to choose for this; finally decided that the terror factor of an Egyptian Cobra was outweighed by the gross-you-out vision of a highly-magnified bedbug, or up-close Rattus rattus rattus. (At last: I knew someday I would get to use the official name of that rat!) Sweet dreams, everyone.