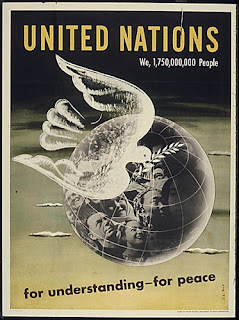 On my schedule, 3/11/11 was dedicated to peace. I guess if you had asked me what the United Nations was all about a year ago, I would have said “Peacemaking.” The sculptures on the grounds of the UN certainly bear that out: a gun with its barrel tied in a knot, a brawny man beating a sword into a ploughshare, and a world splitting open to reveal another world buried inside. And of course the other areas we have been exploring (the eradication of poverty, the empowerment of women, healing the Earth) are absolutely essential for peace.
But this Friday the UN put its other business on “hold” to celebrate the end of the International Year for the Rapprochement of Cultures (even the signs on the bathrooms are in French at the UN…you see a lot of French words here!) and the end of the Decade for a Culture of Peace and Non-Violence for the Children of the World. The celebratory program (we say “programme” here) was titled “Building Peace: Reconciliation Through the Power of Education, the Sciences, Culture, and Communication” and was sponsored by UNESCO (UN Educational, Scientific, and Cultural Organization). It was considerably livlier and more interactive than most UN events.
The programme began with a short film directed by Forest Whitaker (who won an Oscar for his portrayal of Idi Amin in The Last King of Scotland). The film was a powerful documentary featuring interviews with former child soldiers in Africa, and contrasted the rehabilitation of a well-adjusted young boy with the continued embitterment of a young girl who was not able to fit back into normal life, after both children had been trained as killers. The difference seemed to be that the boy had been educated, accepted back into his society, and given HOPE–while the young girl had not. The film was a strong message for the need for reconciliation in the world, and Mr. Whitaker made the point that “If you can’t find peace inside yourself, then you can’t find peace with others.”
……… I think that’s a good place to end–more on this later!