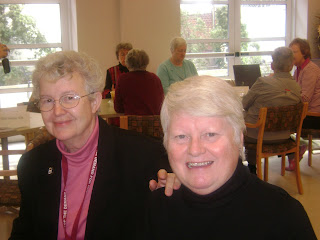 Since I’m over a week behind in my blogging, I might as well go on back and tell you about the UNANIMA Board Meeting on Thursday and Friday of last week. It was great to see Suzanne (on right) and to meet the rest of the board–they are an energetic and interesting group from all over the world. Twice a year they fly in from their countries of origin to participate in the UNANIMA board meeting, and to network with each other. Catherine said this year on their evaluations they voted the most interesting part of the meeting was hearing from us interns. Well, Jan and I gave the program an A+ also, as we reported on our experience to date (you already have a pretty good idea of what I said, if you’ve been following along in the blog!)
I summarized it by saying it was not a “once in a lifetime” experience–more like a “once in 300 lifetimes” experience. The combination of being “inside” the United Nations, of being in NYC not as a tourist but as a “local,” and of living and working with such a diversity of cultures has been awesome, as the kids would say. My global awareness has been raised so much; every day I read something in the paper about some action of the U.N.–news items that might not have registered with me before now. The UN used to be some nebulous entity that had nothing to do with me (the first time I heard of it as a child was when I saw big billboards in northern New Mexico saying “GET U.S. OUT OF THE U.N.!” compliments of the John Birch Society).
I look forward to sharing more with my community and with local groups I work with in Kentucky…there ARE ways that ordinary people can have a voice in the U.N., through the “Civil Societies,” but more on that later. I’ll try to blog a more substantive blog this weekend!