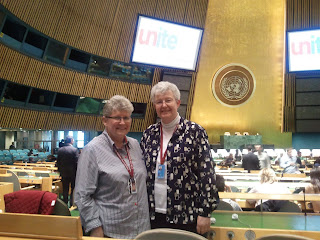 Well, we finally made it: Friday we spoke on the floor of the General Assembly hall of the United Nations–that’s Sister Jan on the left and me on the right. (We were talking to each other, so we could say “we spoke on the floor of the UN!”–Jan was telling me to stand where I would look short, while she stood where she would look tall). The occasion was a civil society hearing on the world HIV / AIDS problem. A “civil society hearing” gives the delegates from member states and governments an opportunity to hear input from people “on the ground” as well as from NGOs working in an area.

HIV remains the only global public health issue to be the subject of a UN Security Council resolution, and has elevated global health issues to a new prominence on foreign policy agendas around the world. Some of the achievements of this effort have been the institution of UNAIDS, as well as a global fund to fight AIDS, and PEPFAR, the largest bilateral global health initiative in U.S. history. Sometimes I’m embarrassed by lack of U.S. response in some areas of concern, but I’m proud of the U.S. leadership and contributions to the global fight against AIDS, with its implications for global human rights, women’s issues, health, and minorities. While the spread of AIDS has been slowed in most countries, and the number of deaths decreased, the number of infections is still rising (2.5 million new cases every year). In many countries the majority of poor people with HIV still do not have access to treatment. The testimonies from people on the panels and from the floor were just heartbreaking stories of suffering, discrimination, and stigmatization…like a new leprosy.

The day before, we went to the UNICEF building for a working session on children with HIV / AIDS. The group of NGOs and other interested parties are getting ready for a high level meeting (that means that heads of state will be there) in June, working on their “message development.” Some of the areas of greatest concern seem to be issues like children who can’t get tested because their parents are ashamed that there is HIV in the family; and adolescents who come out of excellent pediatric treatment programs, only to fall prey to reinfection because of lack of adequate sex / HIV education programs. It will be important to watch what is going on in Washington right now–will we balance the budget on the backs of the poor?