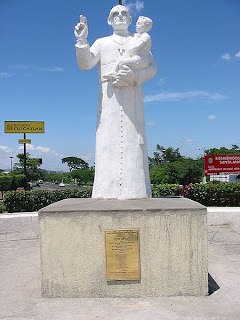 March 24, the anniversary of the martyrdom of Archbishop Oscar Romero, was established last year by the UN as the “International Day for the Right to the Truth Concerning Gross Human Rights Violations and for the Dignity of Victims.” This year the Permanent Mission (that’s what they call the UN delegate’s outfit) of El Salvador celebrated it by sponsoring a remembrance event. Before it started, I was wondering if the officialdom of the nation would feel defensive, but Juan Jose Garcia, the Vice Minister of the Mission, gave a beautiful and moving tribute. Several members of his family had been among the “disappeared” of the oppressive military regime. On behalf of the Salvadoran state, he asked forgiveness of all who had suffered; I’ll bet there was not a dry eye in the room. A Salvadoran priest who had known Romero, and whose family had fled the country, also gave testimony. When we were invited to ask questions or make comments, I shared how the blood of all the martyred religious women, and all our members who suffered in Latin America, had given their communites an even greater thirst for peace and justice.
The same day we attended an event that ended a week-long commemoration of the Victims of Slavery and the Transatlantic Slave Trade. One of the three historians that made presentations scolded us (“us” in general!) because so few had visited the new national monument down at the southern tip of Manhattan–a recently discovered African Burial Ground, where slaves were buried in the very early Colonial days. Of course that planned our weekend for us. We laid out bus and subway routes and found our way down there on a bitterly cold Saturday morning. It is a beautifully crafted and conceived memorial, with a lovely new visitors’ center that has a moving message. Add that to your next visit to New York.
Continuing the theme of remembrance, we walked on down Wall Street to the NY Police Museum, which has, among other exhibits, one that commemorates the police role in the response to 9/11. So many examples in one week of human heroism and endurance–it made me both proud and ashamed. And on the crosstown bus through Central Park, we finally saw some forsythia blooming…a message from our planet that SHE also endures!