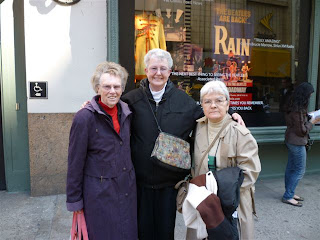 Many of you will recognize these old friends: that’s Sisters Clara, Michele, and CJ in front of Macy’s, near Herald Square (“Tell all the gang at 42nd Street that we will soon be there…”) CJ and Clara were on their way to the Holy Land, with a couple of days off in NYC for good behavior. We got together on Sunday for Mass at St. Patricks Cathedral and brunch in the food court of Grand Central Station. Such a warm fuzzy, to see some Kentucky Ursulines on the sidewalks of New York!
And today (April 5) I met one more “old” friend and one new one. We NGOs have a special meeting once a month of all the Religious at the UN (RUN), for support and mutual inspiration. There are usually about 30 of us there, all from different religious communities of men and women. When we introduced ourselves I saw a ripple of interest down the table when I introduced myself as Ursuline–to find that the interested parties later introduced themselves as Ursulines. We met for lunch in the UNICEF cafeteria later to compare notes. The “old” friend was Sister Jane Quinlan, known to several sisters in our community from Ursuline leadership gatherings, and the new friend was Soeur Deodata Bunzigiye from Goma, the DRCongo. Both are Tildonk Ursulines (with motherhouse in Belgium). Daodata works in the education of street children, refugees, and child soldiers, as well as with trafficked women; she was invited by the UN to come and present information to several groups. Jane is still teaching part-time here in this area, but also represents their community as a UN NGO. I didn’t know there was an Ursuline presence here at the UN, or I would have connected before now.
And on a personal note, this coming Sunday I’m connecting with Sharon, one of just two cousins on my father’s side of the family. She lives in New Jersey, and this will be only the third time we have met as adults. The other time I remember seeing her was when we were 10 years old, when my mother and I came by train from New Mexico to NYC for Christmas. BIG Christmas: I met my grandma and grandpa, and we kids all got bicycles.
All this goes to show that you always have to behave, because you never know when you’re going to run into someone you know. “Make new friends, but keep the old: one is silver and the other’s gold.”