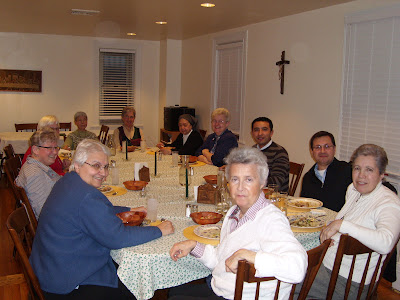 And home looks great! from my room I can see grass and trees instead of bricks… but I feel like I (like Dorothy!) came home by whirlwind, and my room LOOKS like it. From LaGuardia Airport, I looked back with nostalgia at the Manhattan skyline, and shed copious tears at leaving my dear Franciscan community (who are in the picture, with Jan and me and a couple of the Franciscan friars from the parish). But I’m glad to get back to my dear Ursuline community, and the “wide open spaces” of Kentucky. And just in time! according to subway literature, the end of the world is scheduled for May 21, and for that I would rather be here than in New York City.
There is too much in my head and heart to share in a last blog at this point, but I did want to give you the last report on the Sustainable Development Commission. The final draft of the outcome document is still being worked on, but we know a lot of language that the NGOs wanted in there was taken out. For example, getting the “free, prior, and informed consent” of indigenous people affected by mining on their ancestral lands. Too much money at stake for certain countries that I shall not name here!
But as the UN moves forward to the next Earth Summit (Rio+20) in June 2012, work has already begun in the NGOs, to be sure that the nations are faithful to the UN charter and previous agreements. Some UN speakers and expert witnesses told us the world is at the environmental tipping point. Every country on the planet is being affected, but the economic juggernaut is driving us on toward a disastrous future: poverty, food and water crises, war, climate change. Countries lack the political will to take control of the situation. Our governments are not organized to deal with this, with corporations and special interest groups in charge, and unsustainable patterns of consumption and production entrenched. Rio+20 may be our best hope to shift to a new paradigm.
Rio will be focusing on the development of a “Green Economy,” based on the three pillars of economic, environmental, and social concerns. You will be hearing more about this from UNANIMA, and asked for your input in specific areas. We as individuals have to keep OUR government on the path to sustainablity!
I will be keeping track of UN activities–you can too, if you have access to a computer. You can actually watch some UN meetings and press briefings by Googling UN Journal. When you see a little red camera symbol, click on it to watch live or archived video feed.
In the meantime, this is Michele, your temporary “UN Correspondent,” signing off from Lydia Drive, Owensboro Kentucky. Thank you for being my companions on this breathtaking journey…it was fun having you along, and I will forever appreciate having this opportunity.