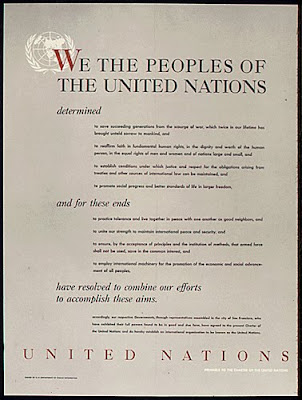 If you’re like most people in the USA you probably don’t know what an NGO is…I didn’t until our Ursuline community joined one a few years ago. In fact, we were among the “charter members” of our particular NGO, called UNANIMA (more on that, later). NGOs are Non-Governmental Organizations. As the name indicates, they act independently of any national government. Early international NGOs were important in anti-slavery and women’s suffrage movements. NGOs have been active at the UN since it began in 1945; in fact, they are actually written into its Charter.
NGOs can interact with the United Nations Secretariat, programs, agencies, and member states–researching issues, lobbying, providing information and expertise. They can influence UN debate by proposing ideas for the draft agenda, submitting written statements, and making oral presentations.
One UN commission (the Commission on the Status of Women) says on its website that the “active participation of NGOs is a central element in the work of the CSW. NGOs have been influential in shaping the current global policy framework on women’s empowerment and gender equality…they play an important role in holding international and national leaders accountable for their commitments.” And NGOs are the way that people like us can influence UN policies!
A former president of the United Nations called NGOs the UN’s “windows to reality,” and Pope John Paul II called them “the conscience of the UN.” Later I’ll tell you what ELSE they call us sometimes, when we “bug” them too much ..!