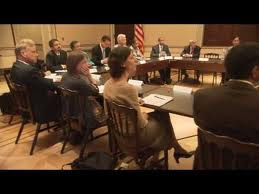 We’re immersed in the nuts and bolts of the two-week Commission on Sustainable Development (CSD), and this is really different from all my prrevious UN experiences. It’s very intense, because this is the second year in the two-year cycle of meetings; the first year for every different Commission is devoted to learning from experts and having panel discussions and talking and bragging about what your country is doing–but this second year is when they actually have to come up with policy, and when the heavy negotiations begin. Sometimes the discussions go on until the wee hours of the morning. If you go to everything you literally don’t have time for lunch or for supper (and since you can’t take food into the meeting rooms you scarf down a sandwich in the hall or up in the little food area upstairs).
At the first session on Monday morning, each of the Major Groups got two minutes to give their comments on the “Chairman’s Draft Negotiation Document.” The nine Major Groups for the CSD are Women, Youth, Farmers, Business and Industry, Science and Technology, Indigenous People, Local Governments, Labor, and–us NGOs. Why these particular groups to represent all of civil society? Why not education or health? The people who did our orientation explained that WE were the groups who made the most noise or caused the most trouble at the last CSD. The squeaky wheel gets the grease.
So…all the NGOs have to agree on what’s most important to them for their two minutes in the sun (and since the religious NGOs cooperate with each other most, it’s not as hard as you might think.) And the Major Groups are always jockeying and strategizing for more time at the table, so we will get to be heard more, later in the process.
Anyway, it’s been interesting to interact with all these segments of society and hear their particular concerns. Kind of like being in community!