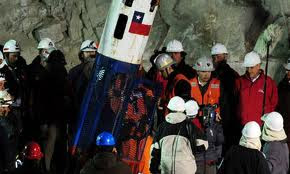 You never know who is going to show up at the United Nations. This week we had three visitors of note: the President of Italy (who addressed the General Assembly early in the week), President Obama (who dedicated the new US Mission right across the street–thereby closing all streets anywhere around and bringing out more police, secret service agents, and bomb-sniffing dogs than the whole population of my hometown). And the third? Mario Sepulveda, the leader of the Chilean miners who were rescued after being trapped for 69 days.
I am working with a small group of religious NGOs who are working on the topic of “mining” in preparation for the Commission on Sustainable Development; our chair heard that Mario was in town, called the lady who is acting as his interpreter and appointment secretary…and Mario cancelled three other appointments to meet with us that very day, the last day of his visit.
He described the religious experience he had in the mine, as he was experiencing “deep sadness” after 15 days of darkness, and set out to find where God was in the situation. He promised that if he were saved, he would spend the rest of his life helping God to do other miracles. But easier said than done! He said “I’ve been a worker for 39 years; what does this path require of me? how do I find it?” The enticements of fame, of being a T.V. star–made it even harder to find that path he promised to God. But he began in Chile with something he knew: helping his parents and friends rebuild after the earthquake. He has started raising money for miners and various disasters (says he is starting with Japan next), and would like to be first on the scene at the next mine disaster, to console the famliies and give them strength.
It was very clear that Mario the Miner is finding his voice, and is becoming an eloquent speaker for worker’s rights. He’s convinced that a global effort is necessary for worker’s rights–that we have to “lose our love for money,” get away from debt, and build a new economy…one not based on credit cards. He ended by telling us to greet all our loved ones for him, and to never take them for granted. After meeting Mario, who could do that?