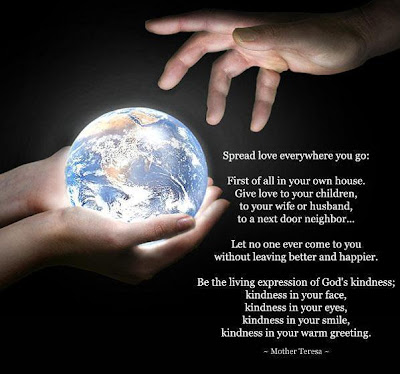 I would like to share a story with you that has much to teach us. It is about a little girl whose grandfather would bring her a present every time he came to visit. These gifts were never the sorts of things that other people brought like dolls, books or stuffed animals. She stated that “my dolls and stuffed animals have been gone for more than half a century, but many of my grandfather’s gifts are with me still.” Once he brought her a little paper cup. She looked inside it expecting something special. It was full of dirt. She was not allowed to play with dirt. Disappointed, she told him this. He only smiled at her and picked up her little teapot from her doll-like tea set and took her to the kitchen where he filled it with water. Back in her room, he put the little cup on the windowsill and handed her the teapot. “If you promise to put some water in the cup every day, something may happen,” he told her. He nodded with encouragement,”Everyday, my child.” And so she promised. At first, curious to see what would happen, she did not mind doing this. But as the days went by and nothing changed, it got harder and harder to remember to put water in the cup. After a week, she asked her grandfather if it was time to stop yet. Shaking his head no, he said, “Everyday my child.” The second week was even harder and she became resentful of the promise to put water in the cup. When her grandfather came again, she tried to give it back to him but he refused to take it, saying simply,” Everyday,my child.” By the third week, she began to forget to put water in the cup. Often she would remember only afer she had crawled in bed and would have to get out of bed and water it in the dark. But she did not miss a single day. Then one morning, there were two little green leaves that had not been there the night before. She was completed astonished. Day by day they got bigger. She could not wait to tell her grandfater, certian that he would be just as surprised. But of course he was not. Gently and wisely he explained to her that life is everywhere, hidden in the most ordinary and unlikely places. She was delighted. “And all it needs is water Grandpa?” she asked him. Sweetly he touched her on the top of her head, “No, my child,” he said, “All it needs is your faithfulness.”

Be blessed and be a blessing to others today!