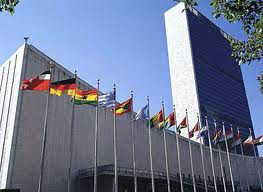 Thursday was my first venture INSIDE the U.N. I tried not to walk around with my mouth open, so I would not embarrass you by letting them know I was a “hick from the sticks.” The complex is actually several buildings–the big tall one houses the administrative offices of the Secretariat, and right now it is closed for its first renovation since the staff moved into it in 1950. The smaller white structure you see on the left houses the big assembly room where the delegates meet in plenary session–and most of that building is also closed for renovation except for the assembly room, the “touristy” areas, the cafeteria, and a few service areas. This building also will be closed at the end of this year (so if you want to see it within the next few years you should hurry). There are a couple of other relatively more inconspicuous buildings, but most of the work now is being done in a large temporary building that was erected on the north lawn.
That’s where we met on Thursday for a briefing on the topic of “what’s next, after the Cancun conference, regarding climate change?” It was exciting to be in the great big conference room, with earphones and personal microphones, and to interact with the panel of speakers…and the content was good. (I’ll be sharing with you on specific topics as we progress in this experience, and the work of the commissions begins in earnest). On Friday Catherine signed us up for an official tour, given by a lovely young woman wearing her colorful native dress from Uzbeckistan. The building has interesting art work and gifts from foreign governments (such as an eight foot model of the royal barge from Thailand, an elaborate ivory carving from China, and a gilded “peace stupa” from three Buddhist countries). There are exhibits illustrating some of the work of the UN, like the footlocker-size “school in a box” that makes an instant school for 40 children, the temporary housing units provided in case of disasters or refugee crises…and some darker reminders like land mines that have been removed from many countries thanks to UN efforts, and fused housewares from the atomic blast at Hiroshima. It made real for me the quote from Dag Hammarskjold, “The U.N. was not created to take us to heaven, but to save us from hell.”