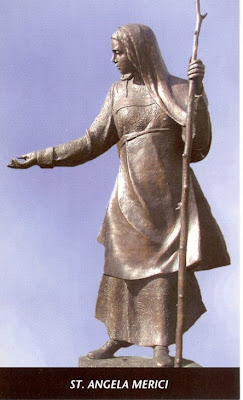 Happy feast day to everyone who loves Saint Angela Merici! the United Nations closed today in her honor (though if you asked any of the officials there, they would say it was because of the 18 inches of snow we have…)

Through the “women religious network” at 211 West 43rd Street, I met one of the New Rochelle Ursulines; we are going to get together soon to celebrate. But in the meantime, the Franciscan sisters in the house here are going to celebrate tonight (I smell the good curry that one of the Chinese sisters is fixing)! Jan and I also stopped in Grand Central Station on the way home and had an espresso to celebrate. Her community patronal feast (St. Bridget) is next week so we will celebrate then, too.
We are quite good at celebrating here (I feel right at home); yesterday we celebrated Australia Day. Since there are two Aussies in our office and several more in the office building where we work, Catherine, the director of UNANIMA, had stopped by an Australian bakery for some Lamingtons (a cake dessert named after some important British guy in Australian history), and she provided a jar of Marmite as well. Marmite is the British version of the Australian yeast delicacy called Veg-i-Mite–and neither one is for the fainthearted. They look like brown wax and taste like old gym socks. Catherine had the office decorated with aboriginal art, various Aussie artifacts, and the flags of all countries represented by people in our office, and there was even a CD of Australian bird song. We all sang the first verse of the “kookaburra” song (I sang the second verse because nobody else knew it…maybe it’s just something the Girl Scouts made up). Then we tried Waltzing Matilda but Jan was the only one who could get through that one. We finished the celebration at home, that night, with a special meal and another Australian dessert, a Pavlova. Lucky we have to walk so much, or we would have to cut back on the celebrations!
Anyway, I’m missing all the “home folks” and wishing you all a wonderful feast day!