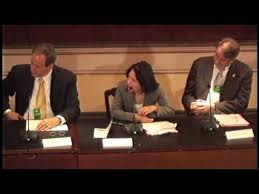 More on how the UN does business! Last Sunday at our orientation for the commission meetings these next two weeks, our facilitator explained the different kinds of United Nations BRACKETS: Alternative, Contentious, Suspicious, Tactical, Uncertain, Waiting, and Weary. Those of us new to the process (like me) didn’t “get it” until later this week.
The 50-some delegates divide into two big rooms, and each group takes a hunk of the text of the draft document provided by the Secretary General…which document contains most of the ideas raised at the past year’s “study” meeting, plus ideas contributed by major groups like NGOs and other ideas from various sources. They began going through the 24-page, very dense document paragraph by paragraph, with member states adding or changing or taking away words or paragraphs, with each modification put in brackets with the contributing country identified. So some brackets represent alternative wordings, some represent issues they are prepared to do battle over, or showing that they are suspicious of why that wording was used, or maybe used as a way to bring another country to the bargaining table, or just because they are uncertain or waiting to hear from their capital what to do. Or just because it is very late at night and they are too tired to go on! Knowing the kind of brackets in play tells a country how to negotiate.
We are now through the first reading, and you can see negotiations beginning in earnest. At our morning briefing for the Major Groups, someone from the Major Groups is designated “rapporteur” (remember at the UN we never use an English word where a good French one will do!) to report back to the group on what the member states did the day before. I volunteered to do that, and a couple of the native French-speaking sisters in my house were laughing at me at breakfast this morning. I found out that in French schools a “rapporteur” is a “tattle tale.” So much for putting “United Natiions NGO Rapporteur” on my resume!